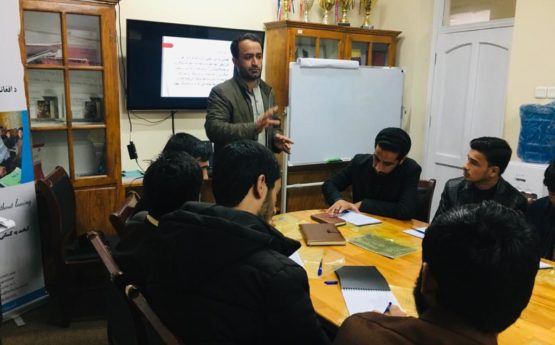 Unemployment and poverty levels have remained significantly high in Afghanistan. The unemployment problem has been exacerbated by the entrance of at least 400,000 young people, every year, to the Afghan labour market. The Afghan labour market does not have the capacity to absorb the unemployed young workers and it forces the young Afghans either to leave the country in search of work in neighbouring countries or to the streets where they often get involved in crimes.

Aschiana has been implementing and supporting youth empowerment and peace building programs since 2012.Youth from different community were sensitized, trained and empowered on peace building and other related topics.

Aschiana has also implemented a youth-empowerment project in the Kabul province, at three different districts. We have created 6 groups, each containing 20 members. There were three separate groups of male and three of female. Youth were trained at the Aschiana day-care centre in Kabul. These youth group created by Aschiana has collaborated with the local leaders, village heads and shoras (religious leaders) and has been a continuous part of their village development.

The youth groups established by Aschianahave planned several campaigns for clean environment andpromoting greenery of cities. They have also participated physically in these campaigns.They have also organized football tournaments at public schools in Kabul, for both boys and girls.120beneficiaries have been trained in computer and Aschiana has aided them in finding jobs and supporting their families.