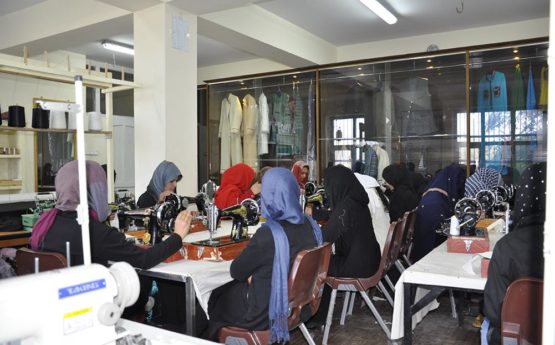 Four decades of war has crippled the employment scenario and a staggering 63% of the population under 25 years of age, Afghanistan is in desperate need of building its training and vocational institutions to aid the transition from social recovery to economic growth. In Afghanistan, women’s community centres play a critical role in addressing gender-based violence and helping women reintegrate back into society in a position of increased agency.

Aschiana provides vocational training on tailoring and embroidery for higher age girls and women so that they learn a new market related skill and use it to earn or increase their livelihood. Through this initiative Aschiana aims to increase the overall household earning so that more children are sent to school.

Over 2000female and women have graduated from this project. Many of them have started their own tailoring and embroidery shops and sell their products in the market.

Afghanistan has experienced a continuous pattern of violent armed conflict since the early 1970s which has precluded development, intensified poverty and caused widespread destruction of educational infrastructure, displacement of people and emigration of professional educators from the country, all of which have undermined governmental efforts to universalise the provision of education. As a result, many Afghans have been deprived of their right to basic education. The situation is particularly dire for rural inhabitants and for females, with reports suggesting that only about eight per cent of Afghan women are literate.

During the Taliban regime, females were prohibited to attend schools and learn all across Afghanistan. Aschiana organization was one of the first organisations who started literacy program for women and higher age girls and accelerated education programs for the girls in Afghanistan.

Since 2003, Aschiana has been implementing Female Accelerated Learning Program (ALP) in Kabul, Afghanistan. The program supports girls who do not have access to education, and those who were unable to attend schools. We began with 5 groups in Kabul, each consisting of 15 female members. We plan to scale this program and form at least 10 groups in each of the province we are present in.

Since 2003, Aschiana organization supported hundreds of women’s and girls’ through female literacy program. Aschiana has supported around 10,000 higher age girls through accelerated education program in Kabul.