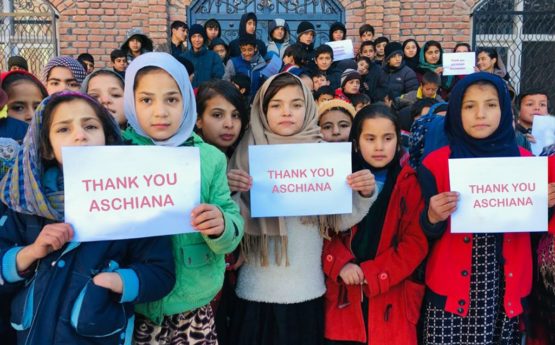 ASCHIANA (meaning the “Nest” in Dari) is a non-governmental organisation foundedin 1995 by Engineer Mohammed Yousef to help children working on the streets in Kabul, Afghanistan. He witnessed the desperation and poor conditions of children he encountered and established Aschiana to provide a refuge where they could learn educational and vocational skills.

In the year 1996, Aschiana conducted a survey, with the assistance of UNICEF Afghanistan and Terre des Hommes (Lausanne, Switzerland), and discovered that there were more than 28,000 children working on the streets of Kabul. More than four decades of arm conflict in Afghanistan had destroyed much of the country’s infrastructure: healthcare, education, roads, and government. Millions of people have died or have become physically disabled, while millions more have been displaced, internally or externally. Many women have been widowed, and children orphaned. 3.7 million (44%) of all school age children are out of school and the crisis is especially acute amongst girls, who at the age of 15 and above have a literacy rate of just 18%, compared to 62% amongst boys.

As of 2017, UNICEF has estimated that 60,000 children were working on the streets of Kabul alone. The majority (between around 8 or 8 out of every 10 children) of them boys have to work on the streets in a bid to support their families.  Children at risk in urban and cross-border locations include:

In 1995, the first Aschiana Centre was opened with the help of Terre des Hommes (Lausanne, Switzerland) for 116 children between the ages of 6 and 12, who would come and rest under the supervision of social workers during their tiring working days on the streets.

Our current activities includes providing children withnutritious meals,education, medical treatment, vocational training, art based therapy, sponsorship for school, small-scale business training to the families of these children, awareness raising training/activities for them and their families, legal assistance, as well as legal advice and counselling for free of cost.Currently, we are present in 7 provinces (Kabul, Mazar-e-Sharif, Herat, Kandahar, Bamyan, Nangarhar and Paktia) of Afghanistan.